Hi Folks, this one’s a bit long-winded but I made a lot of mistakes on the stainless restoration early on so hope this helps someone going through the same thing.

I’d read the book “How to restore metal auto trim,” spurred on by the fact that it had a 57 Chevy on the front cover dripping with fabulous shiny stainless. Dull reading indeed but armed with my new found knowledge I got stuck in to my 57’s stainless with a vengeance. The books’ techniques for getting out the dents worked fine for me but beyond that I quickly found that after many cock-ups, much profanity and near loss of limb using my amateur polishing kit I discovered some quicker methods that worked for me. Whether the same methods will work for you I really can’t say but here goes.

Getting the dents out is pretty straightforward, lay the piece face down flat on a variety of shapes of wood and gently tap the dents out with various sizes of small, round ended metal rods. I never used a hammer direct on the piece as it’s too hard to control where you are hitting. Work in a circle around the edge of the dent first, then work towards the centre.

INTERIOR TRIM DISTORTED ON THE SCREW HOLE AND COVERED IN SCRATCHES 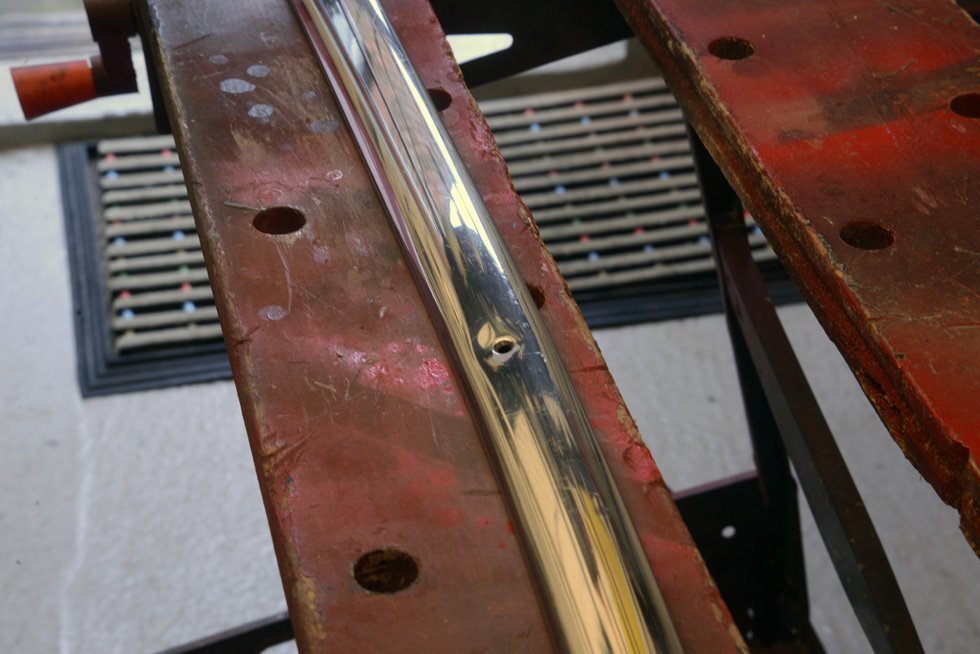 Once it’s as flat as flat is possible it’s now time to work on the shiny side to get it straight. On a curved damaged area wrap some 120, or 180, or 240 grit paper around a curved piece of wood and with as FEW STROKES AS POSSIBLE get the stainless flat (as you would with body filler). This is initially very distressing to say the least as you are seriously messing up your stainless! The aim is to get the metal flat taking as little metal off as possible. This is about as hard as it gets, practice on some old parts but you’ll find the original stainless is actually quite thick. If you tickle about using finer grit paper you won’t get it flat. After much trial and error and a lot of hours wasted I would ONLY recommend you do grit sanding by hand on the complicated curved parts that may be damaged or have deep scratches. Using a DA sander WITH THE ORBITAL OFF from then on is the fastest ticket to shiny stainless. I found using coarse polishing mops and compounds through to finer ones tended to put more scratches in and painfully slow with amateur kit. On all the flatter parts like this, after tapping out any damage or dents I went straight to the air DA sander with the orbital OFF. Using as fine as possible DA sanding discs 120, 180, 240 (ideally 240) do a couple of passes ONLY over the repaired area to get it flat. Needless to say go at it too heavy and you’ve ruined your expensive trim. SOME 240 GRIT AROUND THE REPAIRED DIP ON THE RIGHT HALF, AND STARTING WITH 320 ON THE LEFT 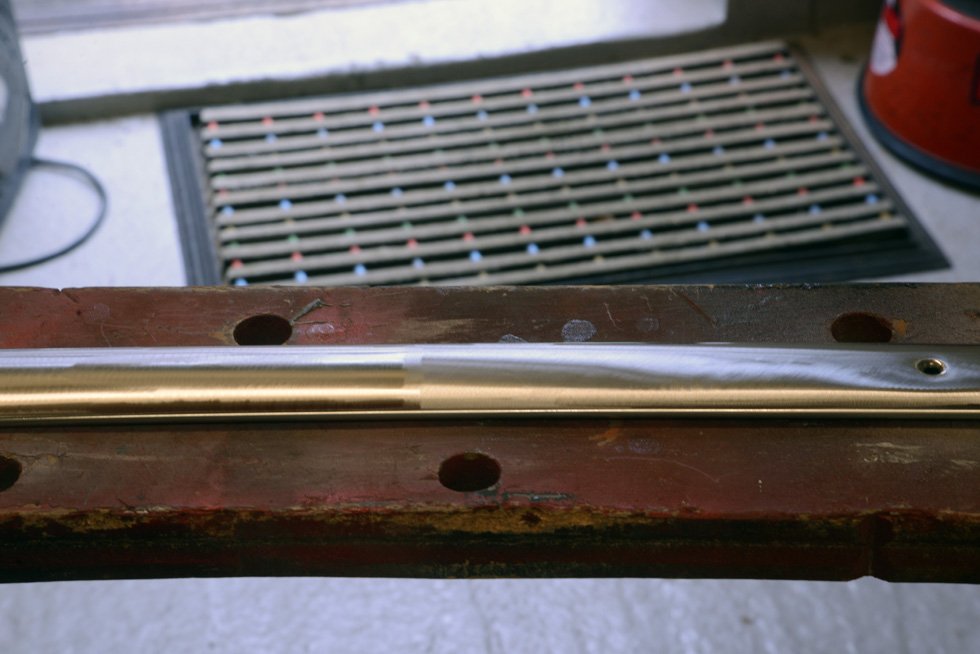 Moving on, a 240 or ideally a 320 grit will swiftly get rid of any deep scratches on any piece. On a used straight part I always started with a 320 pad to get the worst scratches out first, tickling around with anything finer you’re just wasting time. After 320 then move up to 400, then 600, then 800 over the whole length of the stainless. What I found is that as you move up through the finer grits moving in the opposite direction to the last, you can easily see any scratches disappear and at 600 grit you are starting to polish the part with the DA better that a coarse mop and polishing compound. 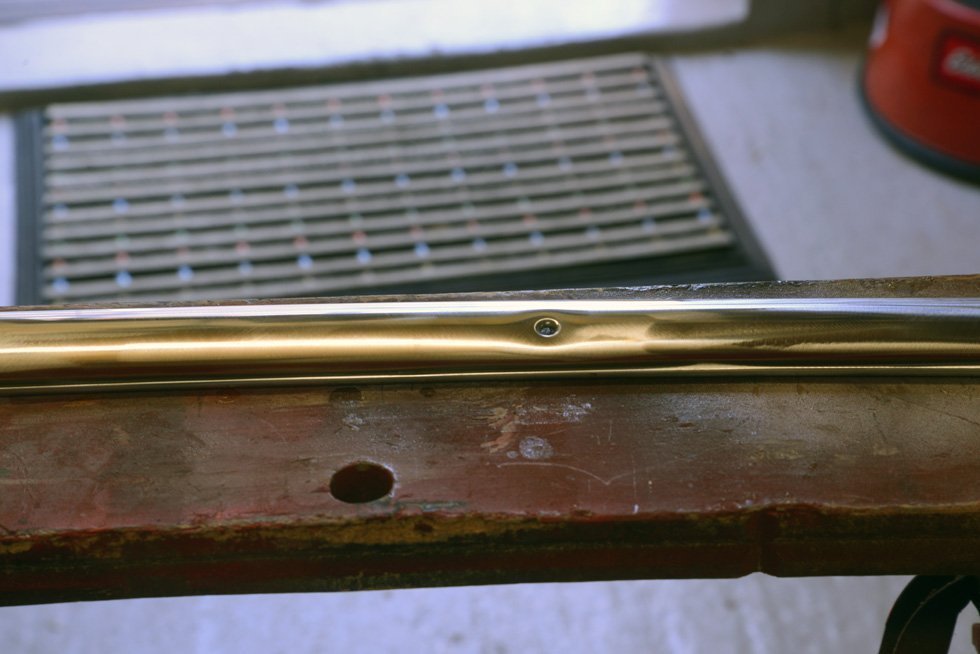 Even on a couple of new repro side trims that I bought (which are thinner and not that great) I went over them starting with 600 to lose any flaws to get them as shiny as the rest. After 800 I finished off with 1000 pads which should leave it scratch free with a dull shiny finish. If you find the odd scratch still there it’s a case of going back to the finest grit that will shift it and work back.

Finally, I’d then buff to get a full shine with a loose mop and white compound. I’ve no idea what this compound is as I bought a huge brick of it 30 years ago at some car show but it works. After a good clean I’d finish them to a near chrome finish with another loose mop with blue compound.

It may seem nuts to scratch up your stainless with a DA but time and time again I found this much quicker than doing the same thing with various mops and compounds. A few more tips. I made a steel stand for the cheapo (but very reliable) Clarke polisher as I found it less messy polishing in the garden as the stuff gets everywhere. You’ll get through a lot of DA discs, I found the velcro ones less prone to flying off, buy in bulk. Wearing leather gloves and proper safety kit is essential, polishing the long bits is especially dangerous.

In conclusion, if you can afford it get someone else to do it! I couldn’t afford it and mine took weeks, I still can’t believe just how much stainless is on a tri-chevy and how long it took. If you do choose to have a go it is tedious but the trauma eventually wears off when you start to bolt all that shiny stuff back on knowing that you did it. Hope this has been useful, any questions just ask. FINAL RESULT 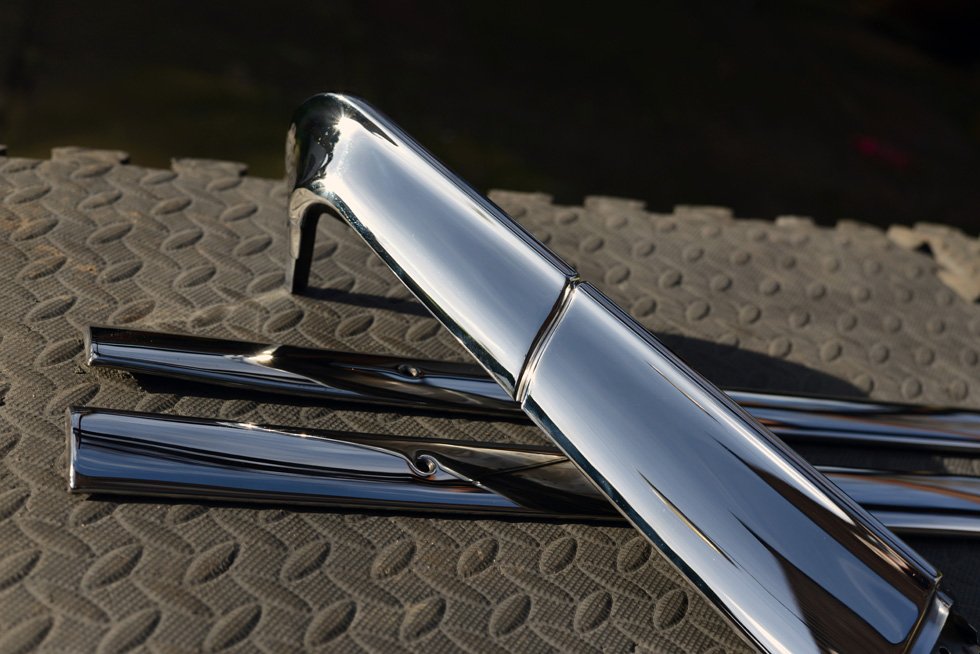