I started with the headliner and the first job was soundproofing. There’s a ton of bewildering online advice about soundproofing products, some are cheap, some ridiculously expensive. I went for silent coat which seemed to get good reviews and was cheaper than Dynamat. 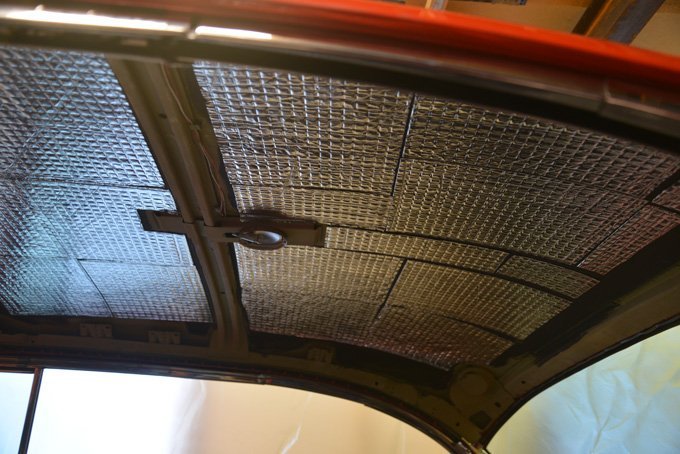 The vinyl headliner had been rolled up in the loft for eight years so looked a right mess when it was first hung, I warmed it up then just left it hanging for a few days to let it loosen up. 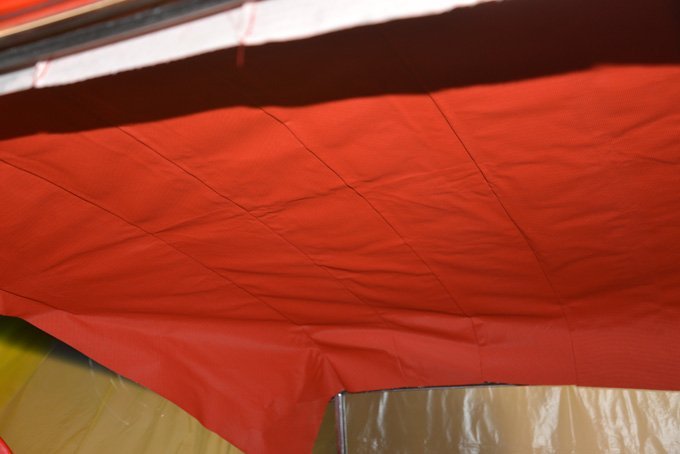 It took a couple of days to get it in this state repeatedly heating it up with a heat gun and re stapling over and over again. The staples didn’t want to stay in the new tack strip. 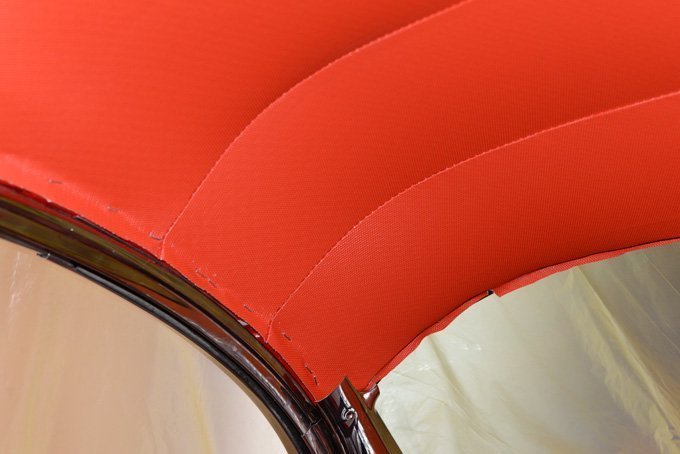 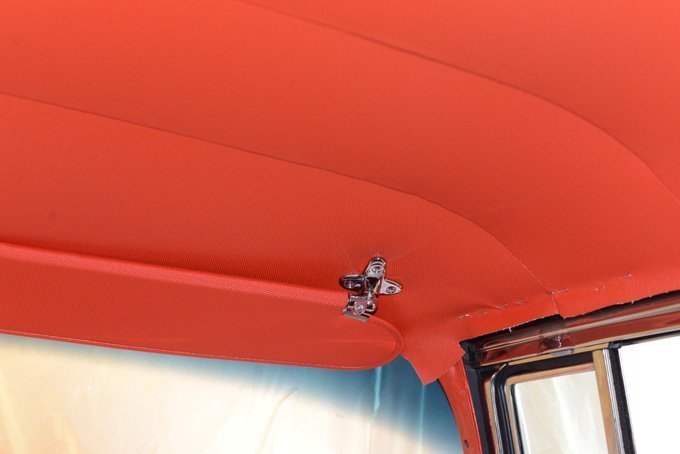 All done, the last of the interior stainless was polished and fitted which wasn’t easy. I should have trial fitted all the stainless and made the holes before fitting the headliner. 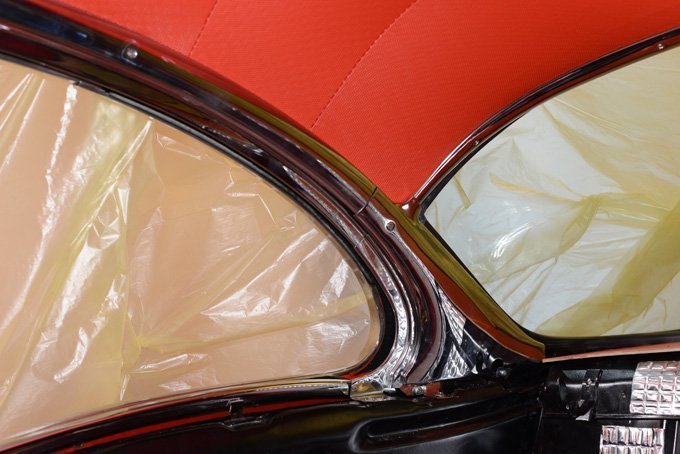 Now having two kids meant that 3 point seatbelts were now an essential feature. The back ones were straightforward enough but what to do for the front belts in a two door coupe? I initially thought I could make do with lap belts but I’d watched a depressing documentary about the history of car safety development in the US. This featured a section about 50’s cars, a detailed and disturbing account of the carnage that the steering column and steel dash could inflict on the human body. Apparently the glove box doors were perfect for removing knee caps. One way or another I decided inertia reels had to be the way to go in the front too. The neatest solution I found was in Australia! John had worked out this solution. I modified this slightly, measured up and ordered a set from Quickfit just up the road in Stanmore. With swanky chrome fittings these were very expensive but it is very high quality kit and looks the part. Once I got around to fitting them they did need some alterations. Quickfit made the changes while I waited and free of charge, top service and highly recommended. 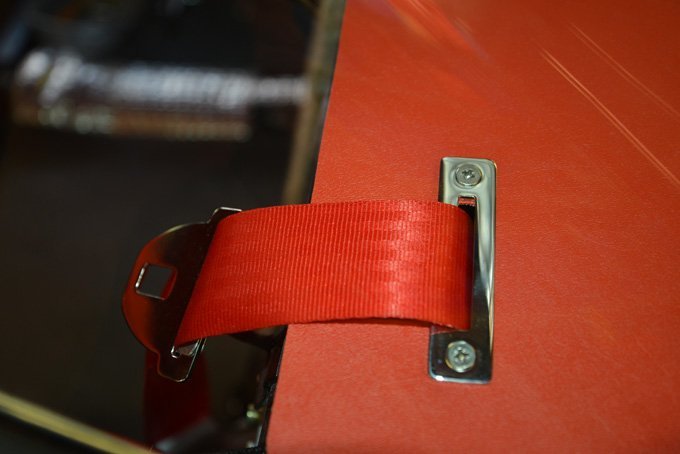 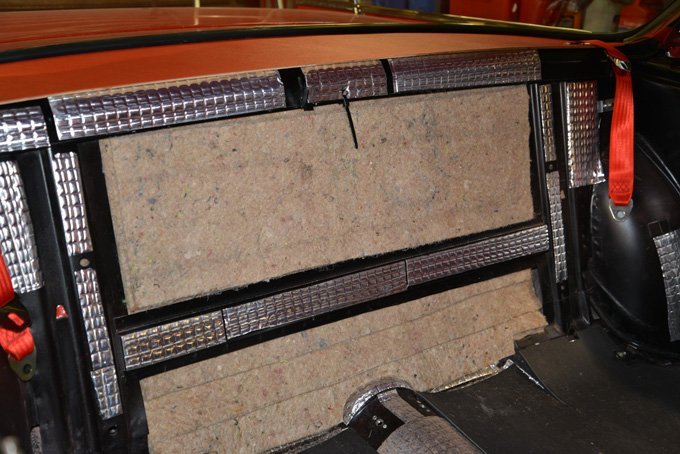 The fronts were tricky, the hardest part was routing the belts though the modified rear arm rests. I welded up the ash tray holes and cut a thin slot for the belts. 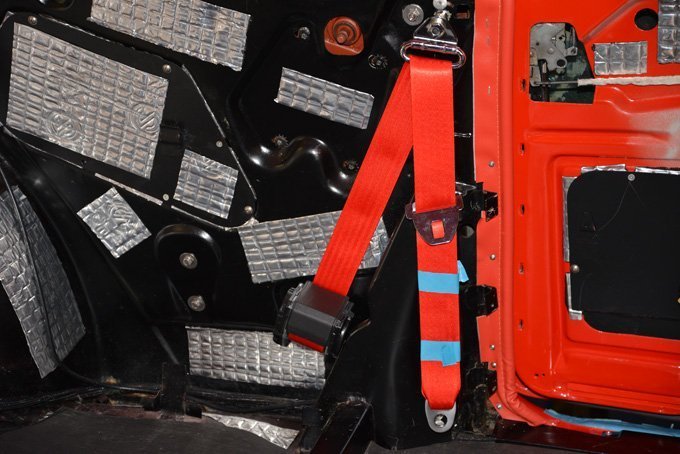 It’s not a perfect solution as the belt routes up to the shoulder but it’s less than a 45 degree angle, they work well and are substantially safer than lap belts. 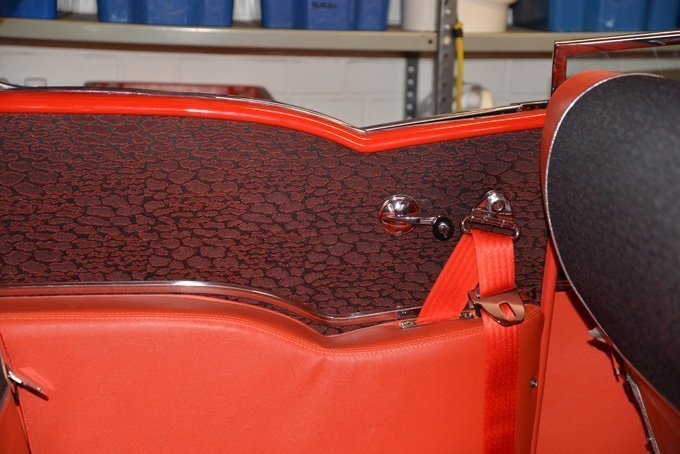 On top of a layer of silent coat I used this to keep the racket from the 383 down so I could stand a chance of hearing the Retrosound radio. 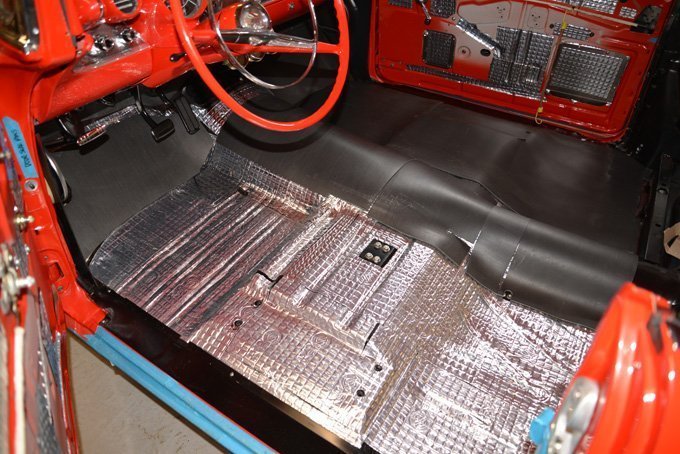 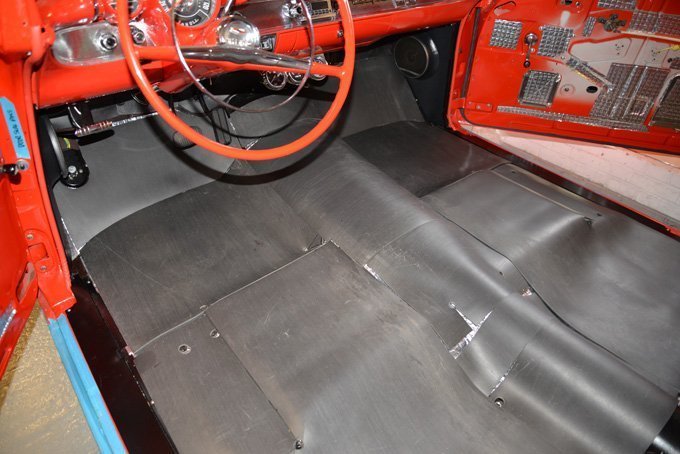 I’d painted the seat hardware way back so it was good to unwrap those and get them back on the seat. 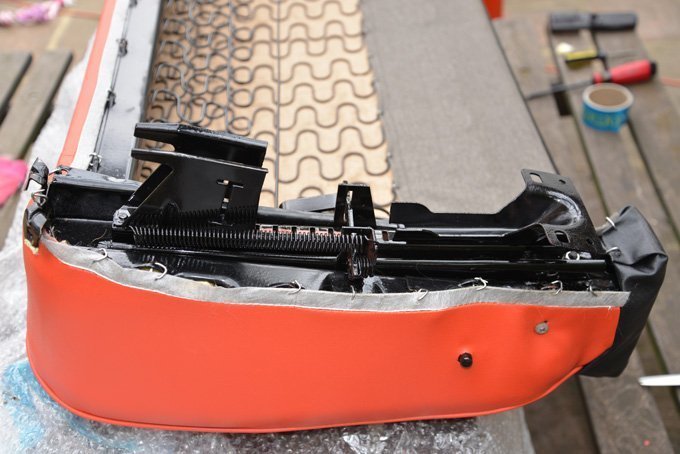 The seat shells were a sod to cover, how Ciadella do these without getting any creases on the corners I don’t know. I gather they are shooting a tutorial on how to cover these and can now also supply softer vinyl material to help but it’s too late for me. I’ll be interested to see how they do it. 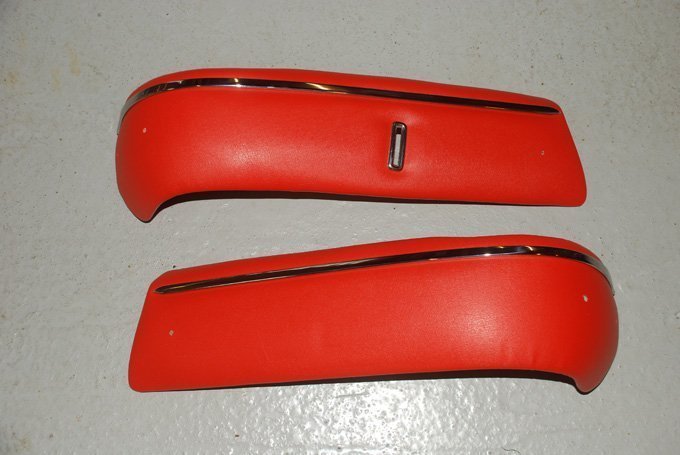 I demolished some of the door card pins whilst trying to put those on. They didn’t line up with the slots in the doors so I had to order more pins from the US which took 10 days. I then carefully marked where they should be and glued some new ones on the cards, another example of repro stuff that doesn’t fit. 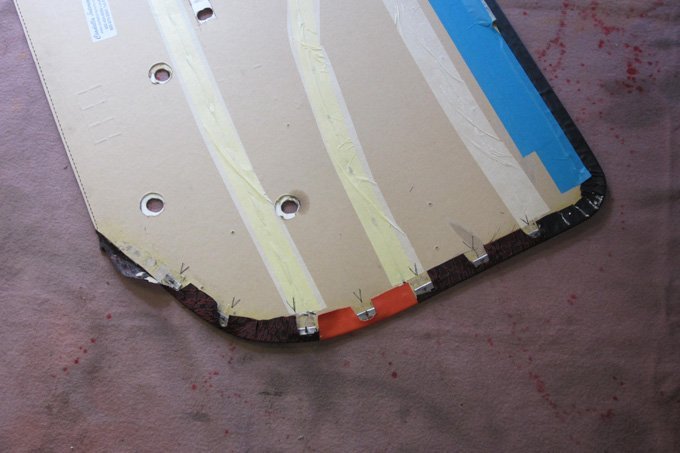 I had a repro rubber mat for the trunk carefully rolled and stored in the loft for a few years. When I brought it down it completely fell apart so that was one of the worst repro parts I’ve ever had the misfortune to waste money on. Luckily I’d bought a trunk carpet from Ciadella which matches the interior so in that went along with the new spare tyre and restored jack. The whitewall radial won’t fit in the wheel recess unless the tyre’s flat! Looks like I need to keep a foot pump in there too. 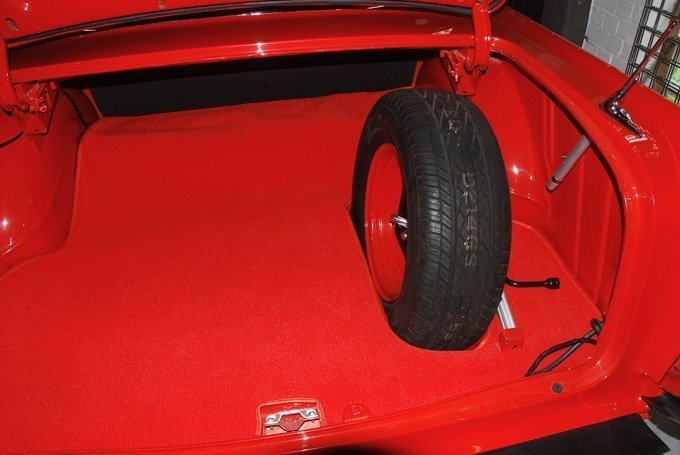 With the seats in the interior was pretty much finished and also freed up a lot of storage space in the garage. 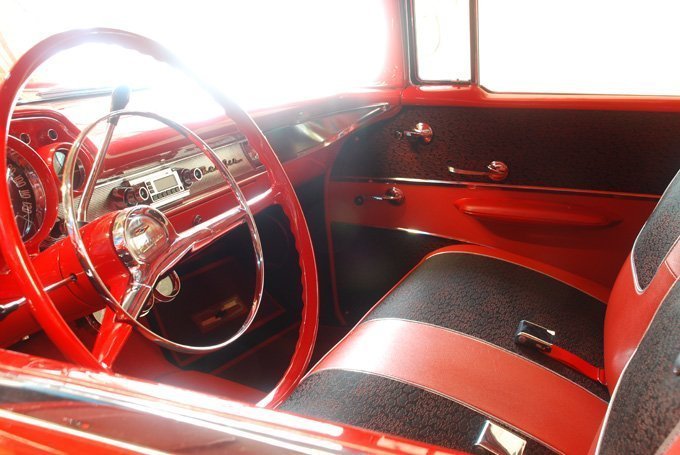 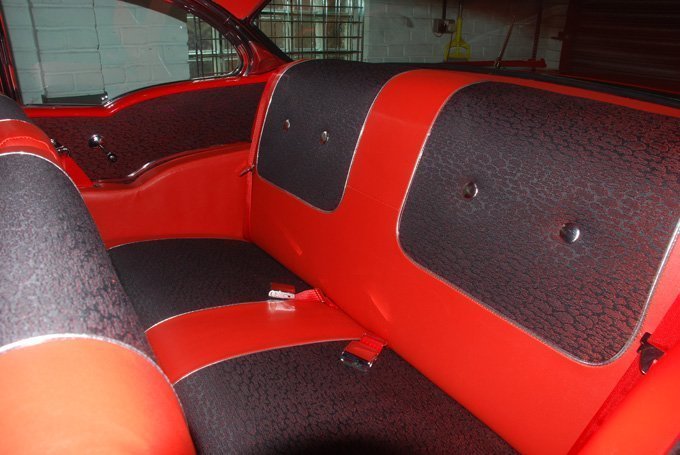